No More 🤡 Clowning Around: Get Inside The World Of The 🤡 Clown Emoji And Learn How To Use This Powerful Symbol To Your Advantage 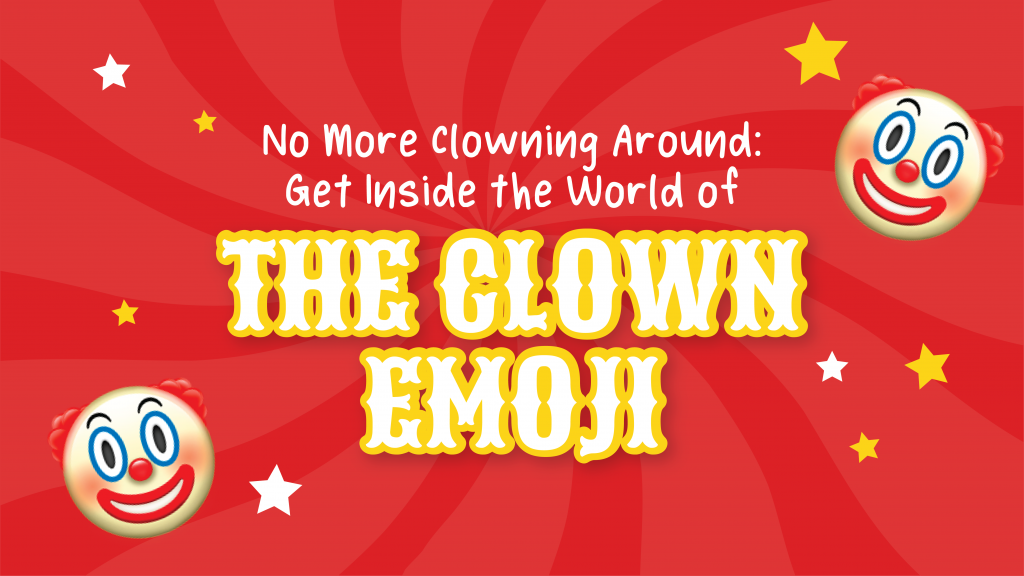 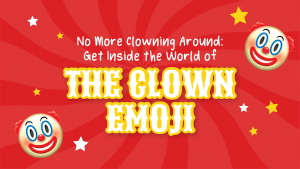 Clowns are either harmless fun or the stuff of nightmares, depending on who you ask. Regardless of your viewpoint, there’s a lot going on beneath the face paint of this surprisingly old profession. Clowns have evolved over the years—you don’t see clowns only at birthday parties. There are movies about clowns, and there’s even a very popular 🤡 Clown emoji.

Whether you love clowns, or can’t stand the sight of them, you can’t deny the fact that clowns are in the spotlight more than ever, whether in the movies, at the circus, or in the emoji-verse. 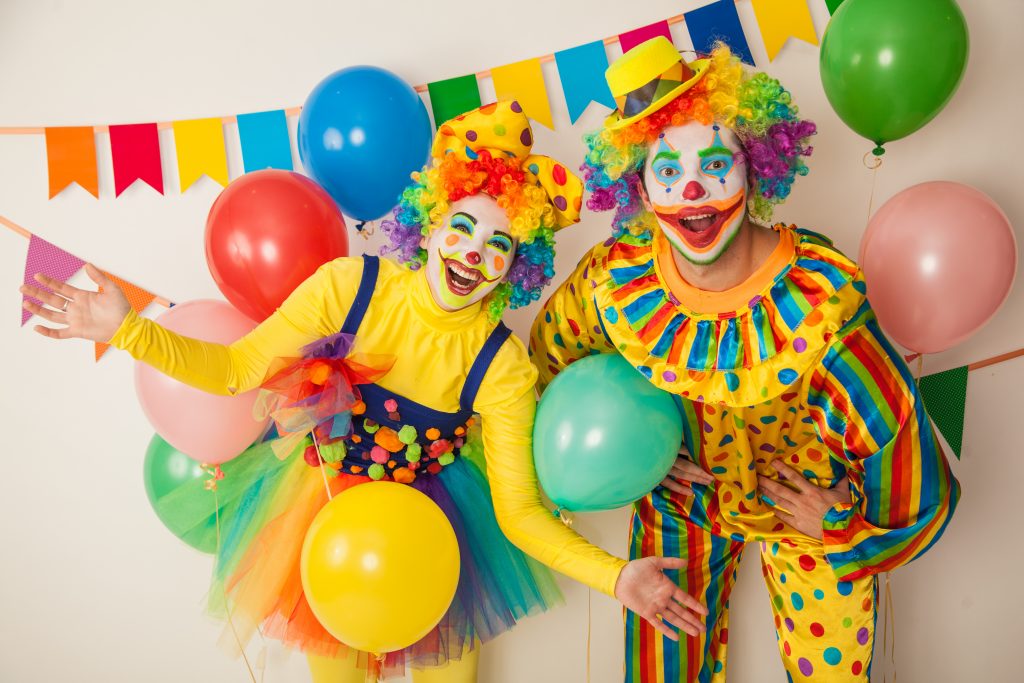 Send in the clowns, or hide in a corner after seeing them? Clowns, once revered pillars of comedy, have seen their credibility and prestige tarnished by Hollywood’s use of them in all kinds of brightly colored mischief and mayhem. In Stephen King’s horror epic, “It,” the title monster can turn into a monster it likes, but it frequently takes on the form of a clown. 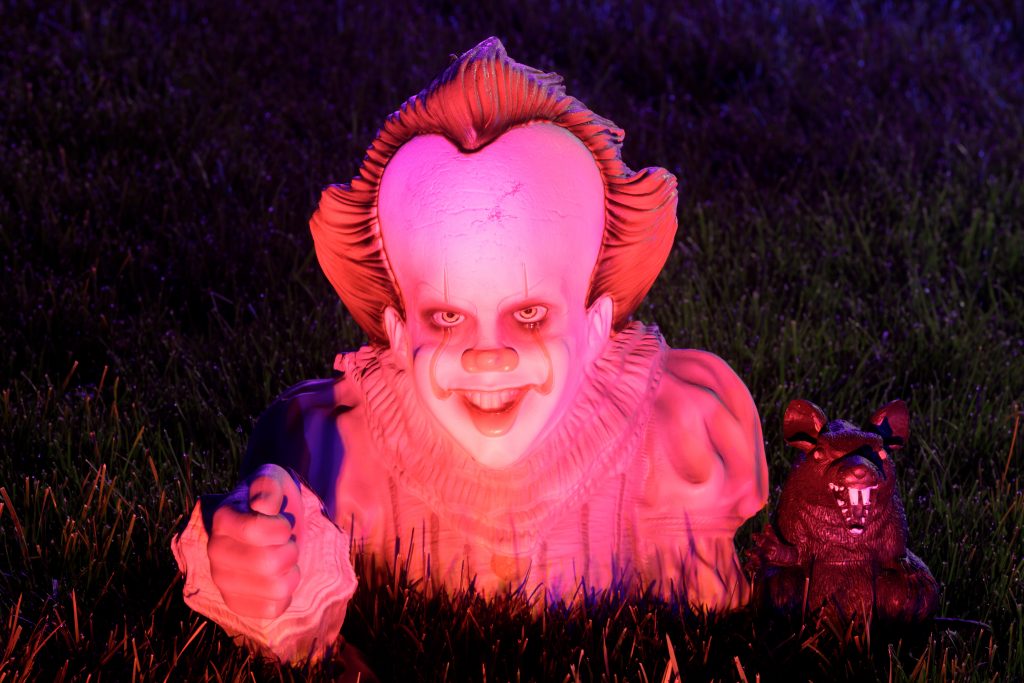 In the emoji world, it’s an entirely different story. When emojis first appeared in the ’90s, they didn’t have a warm welcome. In fact, some people didn’t think there was any use for it. Their thinking was, “if you can’t say it with words, why say it at all?” Eventually, people realized emojis offer a quick and more comfortable way to express ourselves. They are able to defuse awkward situations by making them look funny. 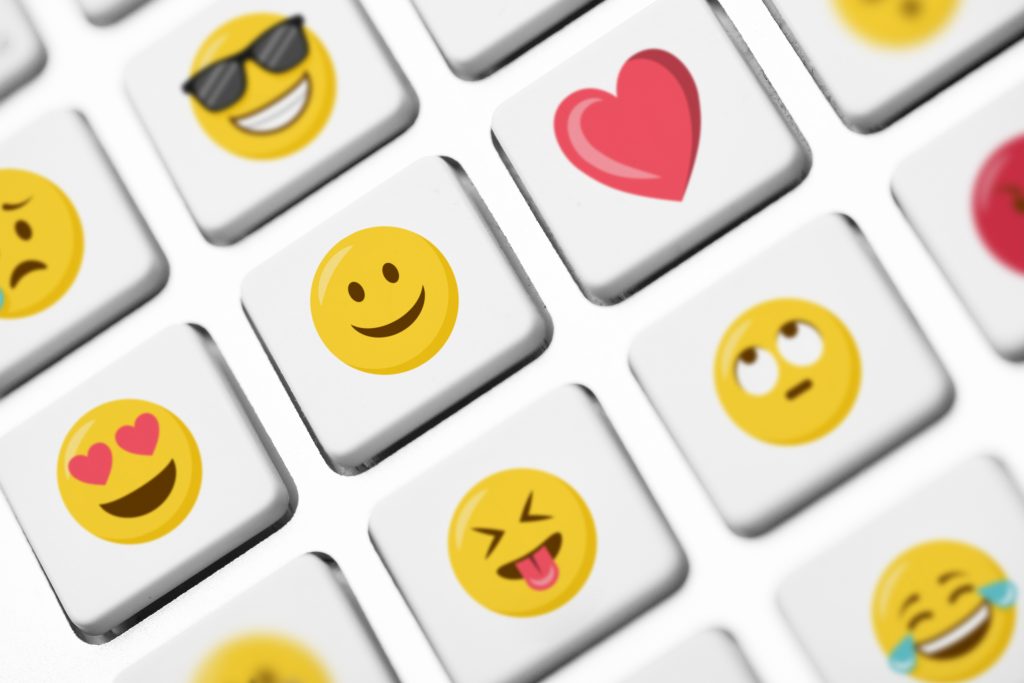 For example, when you want to describe someone as foolish, idiotic, or selfish, instead of conveying that anger via text, putting a—you got it—🤡 Clown Face emoji is a good way to inject humor into your message while not losing the essence of what you want to say.

Some people use the 🤡 Clown emoji to end arguments or to burn someone in insult form. This should be done with extreme caution, unless you are willing to burn bridges with the person you are talking to.

Clowns elicit a visceral reaction in people all over the world, so it’s no surprise that the response to and consensus on the 🤡 Clown emoji has been mixed. However, it is not scary looking at all! The emoji has a white face, a red ball nose, bright red painted lips, blue oval eyes, and pinkish-orange tufty hair, and is dressed as a clown. 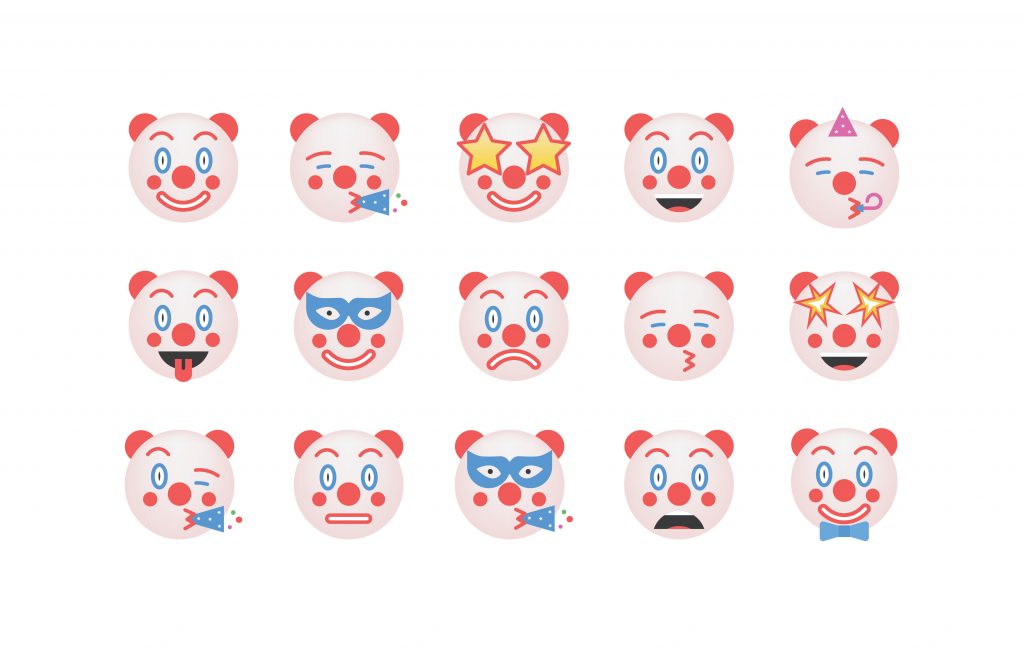 It may be used to convey that the sender or receiver is being childish and “clowning around,” or that a comment should not be taken too seriously. It can be used for references to children’s birthday parties since many parties have them. Since so many people find them frightening, it can even be used to denote something much more dangerous in certain situations!

Check out some of our examples on how to use the 🤡 Clown emoji in tweets, messages, and social media posts:

– People who don’t believe in global warming, with all that is happening in the world, it’s absolute clownery 🤡 That is what it is!
– After watching “It,” and “It 2,” I cannot stand to see another 🤡
– When you want to tell guys who cheat on their partners, you all are a bunch of clowns 🤡🤡🤡

There’s something inherently a little silly about using tiny cartoon images to simulate sexy thoughts. Thanks to several influential naughty emoji lovers, the 🍑 Peach and 🍆 Eggplant emoji have taken a life of their own. But they are not the only ones!

When you are about to do something with your ex, and your friend gives you the 🤡, you know exactly what it means. It is a warning sign that you are doing something stupid, but in the grand scheme, harmless. It says, “What you are doing is stupid, you probably know it, and you do not care.” What you do at that moment is entirely up to you!

Not so good at coming up with imaginative emoji combinations? Don’t you worry, we are here to help you out!

Check out some cute and funny emoji combinations we’ve thought up to challenge you to step up your game:

While clowns are the highlight of many parades, circuses and carnivals, the history of clowning goes back much further. The tradition of clowning around can be traced all the way back to ancient Rome and medieval times, all the way to North American Indians. Clowns are known as over-the-top characters with colorful make-up, outrageous clothing, and big shoes, but they did not always look that way.

Clowns In The Past 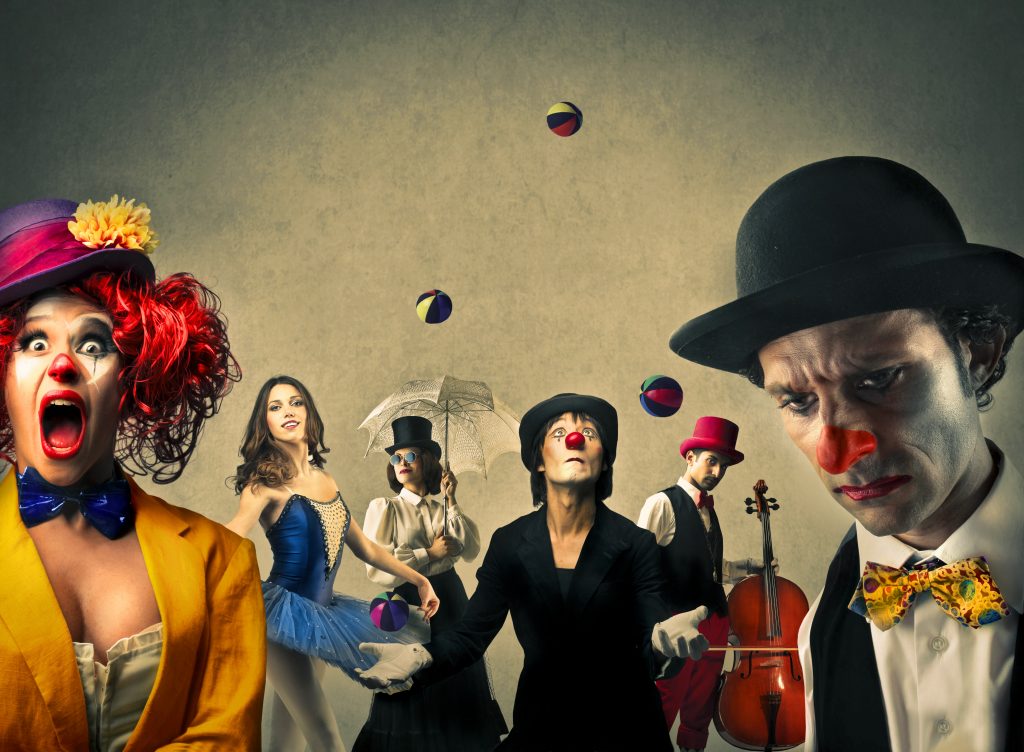 Clown tradition dates back to 2,400 BC, when the first mention of clowns was discovered in Egyptian hieroglyphics during the Fifth Dynasty. Clowns were assumed to play a socio-religious role because priests sometimes played clowns. In fact, did you know that jesters were found in 300 BC China under the reign of Emperor Shih Huang-Ti? Clowns also served as interpreters in India in the year 100 AD, translating the Prakrit language.

History Of The Clown Emoji

🤡 Clown emojis aren’t that old, of course, since emojis were created in the ‘90s. In fact, the 🤡 Clown emoji was first introduced in Unicode 9.0 on June 21, 2016. Unicode 9.0 is the ninth batch of symbols released by the Unicode Standard, a character coding system designed to support the worldwide display, processing, and interchange of the written texts of the diverse languages and technical disciplines of the modern world.

Unicode 9.0 added 7,400 characters to the Unicode Standard, rounding up the total to 128.172 characters. Included in that group are 6 new scripts and 72 new emojis. The 🤡Clown emoji was added to Emoji 3.0 in the same month and was later featured in the September 2014 iOS 10 update. It also appeared on iOS 10.2, Android 7.0, and EmojiOne 2.2.4 for the first time. With all the exposure this symbol received, no wonder it became so popular!

The 🤡 Clown emoji appears differently depending on the platform it’s being viewed on. You can find the 🤡 Clown emoji on a variety of websites and operating systems including Apple, Google, Facebook, Twitter, JoyPixel, Windows, and Samsung.

Before using the 🤡 Clown emoji, it’s best to see how it appears on the device you’re holding. For instance, on Facebook, Twitter, and JoyPixels, the hair of the clown is blue, while on Apple, Google, and Windows, the clown’s hair is red. For devices that do not support the 🤡 Clown emoji, a blank box or an X appears, instead.

How To Draw The Clown Emoji

If you are a parent or a teacher, you know that getting kids to talk about their feelings can be a challenge. Influencing them to like emojis will help with that. When your kids or students want to say something but have a hard time doing so, they can post an emoji or even draw an emoji to help them express themselves.

That said, if you or your kids or students love clowns, check out this fun 🤡 Clown emoji drawing tutorial: 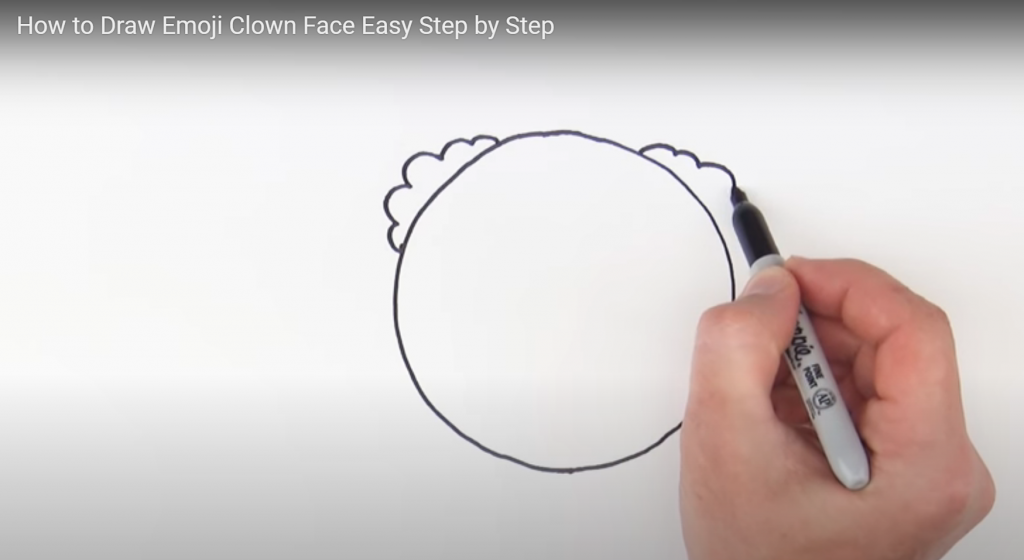 2. Outside the black circle, on the uppermost left and right side, put red curly lines. These will serve as the clown’s hair. Imagine you are drawing clouds on each side.

3. Inside the big black circle, draw a small, red circle. This will be the clown’s nose.

4. Below the small, red circle, use large, red curves to draw a mouth.

5. Inside the circle, draw two oval circles. One set will be bigger than the other. These will be the clown’s eyes. 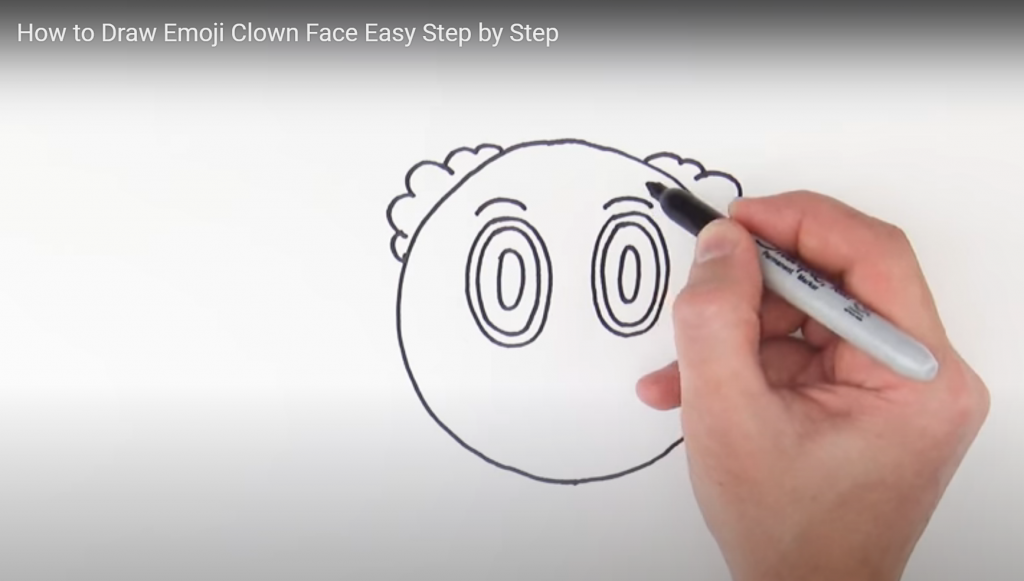 7. Fill in those eyes with black colour.

8. Draw blue, oval circles around the eyes you just made.

9. Remember the red, squiggly lines you did at the start of the tutorial? Color inside those lines with a brown crayon.

10. Color the sides of the nose with brown. 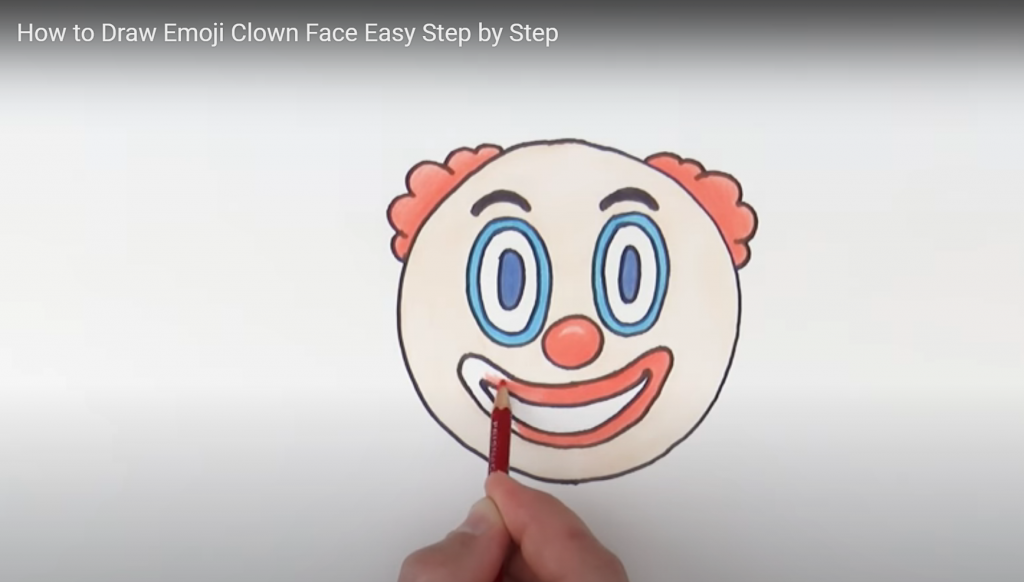 11. Fill in the insides of the mouth and hair that you just drew with a nice, orange colour.

12. Make sure the hair, nose, and insides of the mouth are orange!

13. Add in two half circles for the clown’s eyebrows. 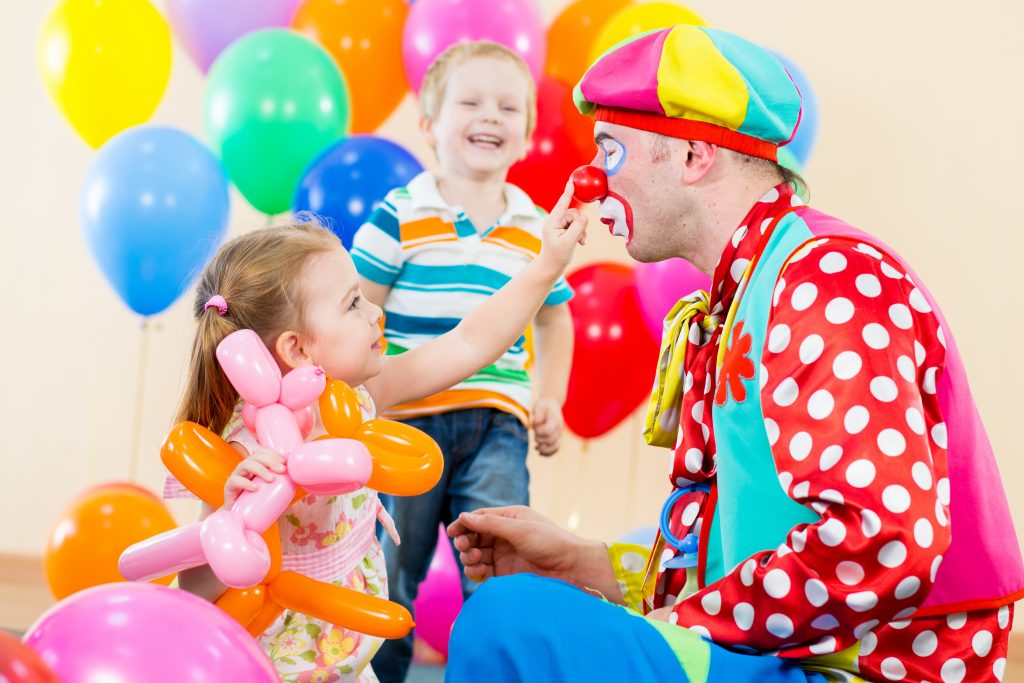 If you’ve ever seen or brought a clown to one of your children’s birthday parties, you know how memorable they are. Clowns make us laugh, amuse our children, and perform amazing feats of dexterity. Clowns have become so popular, there are even all sorts of 🤡 Clown emojis, which we discussed lengthily in the sections above.

Unfortunately, clowns seem to have got a bad reputation over the last few years. A new character has evolved: the scary clown. Why this sudden turn in how people see clowns? What has changed?

It turns out our brains perceive things as “scary,” when there is a slight mismatch between a known pattern and a new image. At this point, our brain isn’t sure if it should be afraid or not. It’s even got a scientific term, called “The Uncanny Valley Effect.”

Fascinating as that may be, it only goes to show that it is up to us to tell our brains whether we should be afraid of clowns or not. And that is a very powerful thing. Like them? Or hate them? Skip that 🤡 Clown Face emoji on your phone’s keyboard? The choice is yours.

But what shouldn’t be forgotten is if you choose to use them, they should appear in the right context. Don’t use that “It” meme on your officemate who is deathly afraid of clowns. 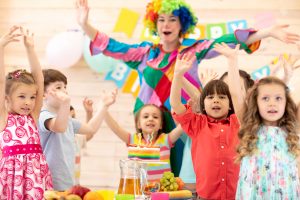 Remember, emojis, memes, GIFs, and symbols, are not just another emoticon on your PC, or phone, or tablet. They also reflect your behavior. If you want to level up your digital presence, picking the right emoji to enhance your image, or the image of your business, is more than just important, it’s crucial—whether you choose to use a 🤡 Clown emoji to make a joke, to lighten up someone’s day, or to poke fun at other people. You have the power.